Bitcoin (BTC) starts a new week in all-too-familiar territory with all-time highs just out of reach.

After a positive weekend, the largest cryptocurrency has avoided a deeper price dip than that seen last week, and $50,000 has stuck as support. What next?

Cointelegraph takes a look at five factors which may shape Bitcoin price action in the coming days.

Monday will form an interesting open for U.S. equities as fears mount over the impact of Friday’s $20 billion worth of block trades.

Originating from major players Goldman Sachs and Morgan Stanley, the surprise appearance of the orders targeting mostly tech stocks has caused a headache for traders. This will now play out once the market opens on Wall St. on Monday.

“Traders everywhere know the story and will be glued to their screens,” portfolio manager Sharif Farha told Bloomberg.

Volatility in stocks implies a knock-on effect for Bitcoin, but the ultimate extent of that depends on movements which at the time of writing remain unknown.

“The markets could start trading in a friendly manner at the beginning of the week,” Andreas Lipkow, a strategist at German bank Comdirect added.

“Although there is currently some major profit-taking and unusual block trade activities, these market asymmetries can currently still be processed well.”

Other macro factors include declining oil prices, though this is nevertheless not as pressing for BTC hawks as stocks. An Opec+ meeting later this week, combined with the potential resolution of the crisis in the Suez Canal, are pushing prices down as expectations of a supply increase rise.

For Bitcoin spot markets, at least earlier on Monday, it’s a tale of consolidation.

Saturday and Sunday brought some welcome relief for traders who had watched BTC/USD descend to lows, which at one point tapped $50,000 itself.

Deeper dives were avoided, however, and liquidity at $46,000 was left untouched in favor of a return to familiar resistance beginning at around $56,000.

At the time of writing, that was exactly where Bitcoin was, still unable to tackle what has become a broad sea of sellers all the way up to current all-time highs of $61,700.

“Bitcoin scenario is playing out so far, in which the crucial resistance fails to break in one-go. Either way, that’s not bad,” Cointelegraph Markets analyst Michaël van de Poppe summarized on Sunday. 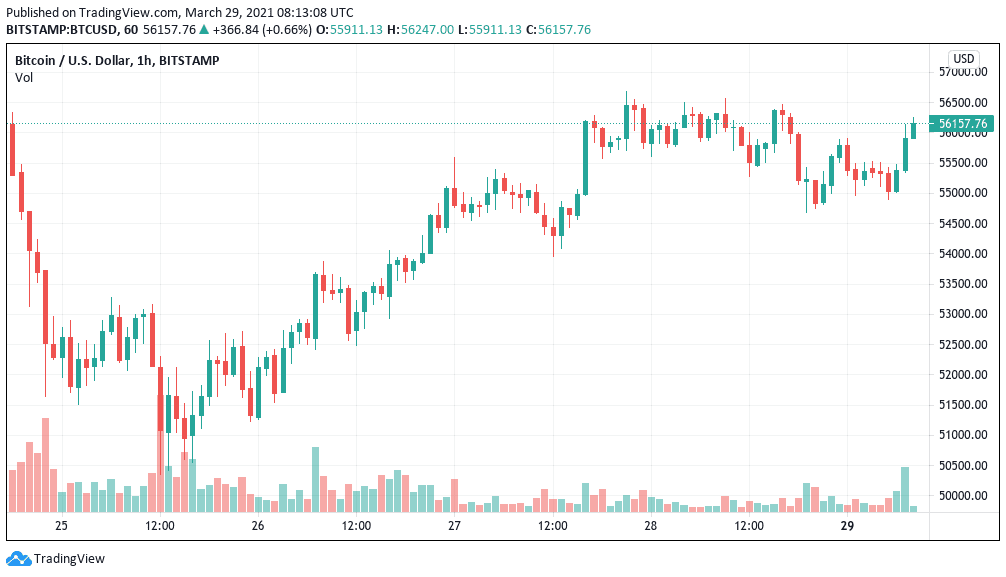 This wait-and-see attitude has characterized the mood among analysts following the all-time highs. The consequences of a supply shock in the form of draining exchange reserves and a lack of selling from strong hodlers, they argue, have yet to be felt.

pril gains “depend on” consumer spending

April’s price performance will “depend” just as much on retail investors as the institutional crowd, according to on-chain analytics service Glassnode.

While normally tightly bound, the onset of lockdowns saw the two measures of retail investor purchasing power diverge — there was more money, thanks to stimulus checks among other factors, but nowhere to spend it.

Now, with reopening creeping into multiple states, the balance is primed to be redressed as pent-up consumer demand becomes a major narrative.

“Many households now have an extra buffer of income to spend, due to new stimulus checks and decreased spending during lockdowns,” co-founders Yann Allemann Jan Happel tweeted.

“Will they invest this into markets or pay off debt? Bitcoin’s April performance will depend on it.” 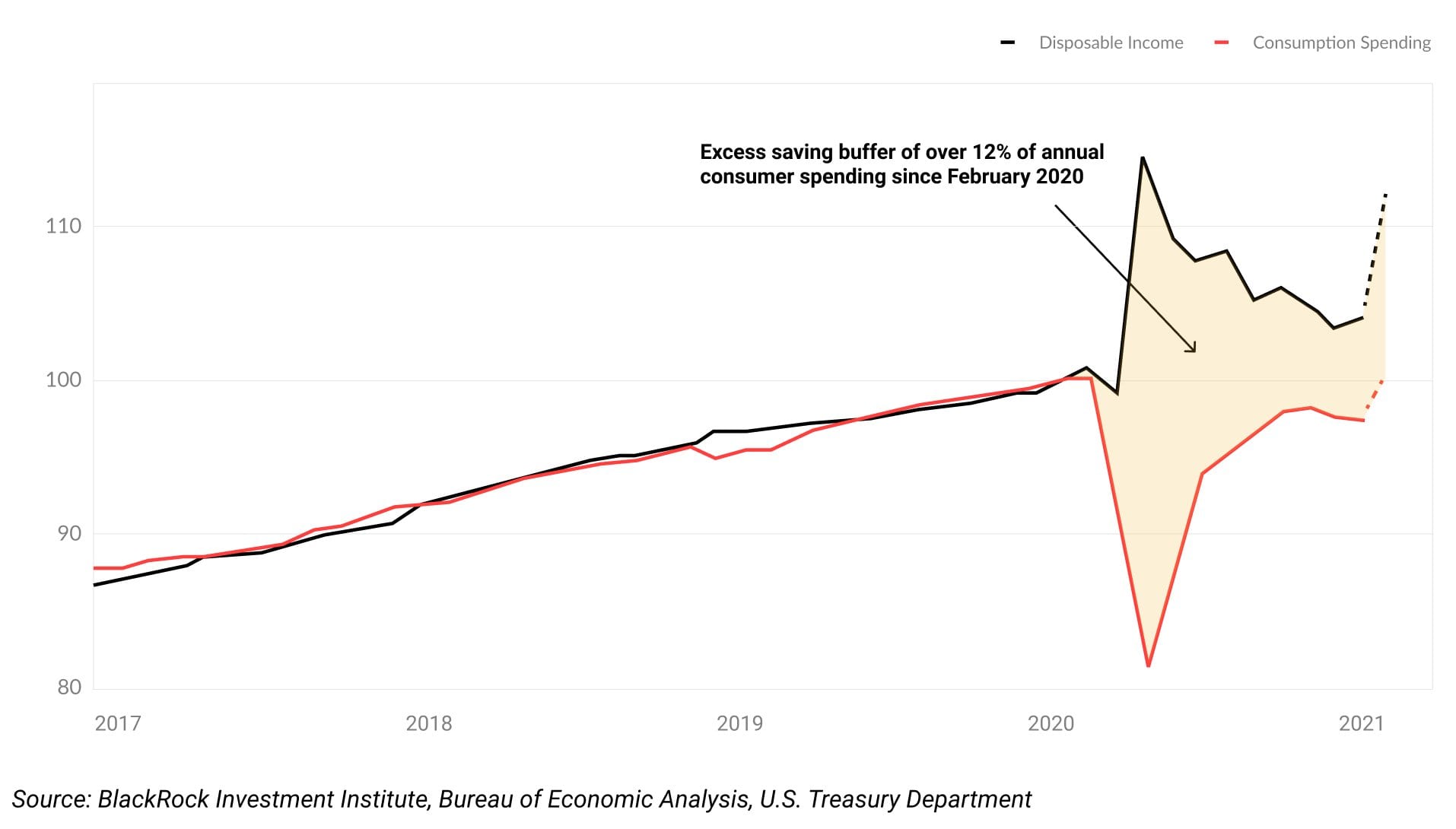 An accompanying blog post argues that the most recent stimulus checks, worth $1,400, have yet to make their presence felt in the economy.

“The recent stimulus package was much larger than the one in January, yet global markets have felt little effects of it in the global markets so far,” Glassnode said.

“It’s difficult to measure to what extent the checks have arrived in households until today, and more importantly how willingly retail is going to spend or save the money this time considering it may be the last monetary stimulus for a while.”

Unconfirmed reports meanwhile suggest that the next round of checks may come sooner than thought.

The latest one to be highlighted is the relative strength index (RSI), which is now entering its “peak” phase which traditionally accompanies price highs.

Quant analyst PlanB, creator of the stock-to-flow series of Bitcoin price models, showed how RSI fluctuates relative to the point in Bitcoin’s halving cycles — four-yearly periods between reductions in the block subsidies paid to miners.

With the year after a halving normally the best in terms of price gains, RSI is indicating that 2021 will be no different to 2013 or 2017.

Stock-to-flow meanwhile demands a $100,000 or $288,000 average BTC/USD price this halving cycle, depending on the exact model used. In terms of investor sentiment, the weekend’s price rise had a welcome muted effect on the chances of an instant sell-off.

That’s according to a classic measure of the market, the Crypto Fear & Greed Index.

A scale between 0 and 100, Fear & Greed charts how the market is feeling about Bitcoin price action, and infers whether recent activity means that it is due for a bounce off lows or a sell-off from highs.

The trip to previous all-time highs of $58,300 in February sparked warning signs from the Index, which circled all-time highs alongside BTC/USD. The comedown saw its score slashed from 94/100 to 38/100 by March 1, only to return to the mid-70s days later.

At the time of writing, the Index measures 72/100, classified as “greed” among investors, but still with much room for leeway before entering sell-off territory, denoted as “extreme greed.”

Did you miss our previous article…
https://www.medianews.ca/2021/03/29/defi-derivatives-and-fixing-an-old-financial-system-kristin-boggiano/