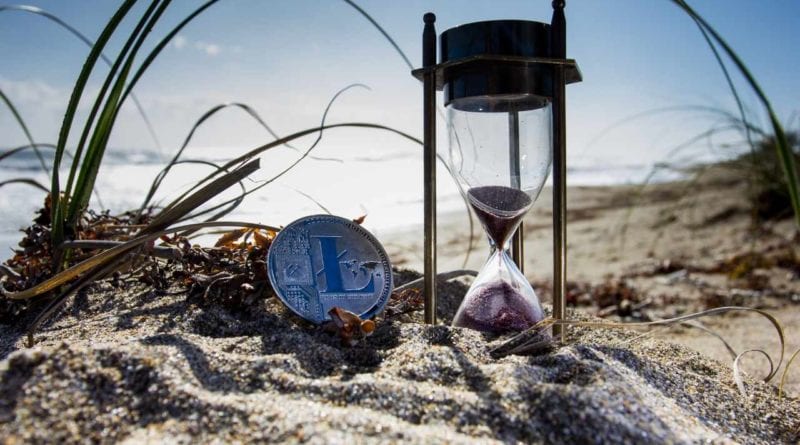 As 2020 comes to a close, it’s a good time to reflect on the biggest crypto developments and the wild ride the sector took investors on.

At the beginning of the year, Bitcoin (BTC) was hovering just above $7,000, and the top-ranked digital asset had started to gather steam as the block reward halving approached. Then came the coronavirus pandemic and a sharp correction in the global stock markets that triggered the infamous Black Thursday Bitcoin crash, which saw the price of BTC plummet to $3,782 on March 12.

While things looked gloomy for Bitcoin and the greater global financial ecosystem, the decentralized finance sector was just beginning to heat up.

An emerging wave of DeFi protocols took previously glitchy and hard-to-navigate decentralized apps and exchanges, such as EtherDelta, and transformed them into high-volume, high-yield unicorns that provided investors with consistently high returns on a regular basis. In terms of total value locked (the value of the assets committed to the protocol), transaction volume and market capitalization, many DeFi platforms and their associated tokens now rival the top centralized exchanges. 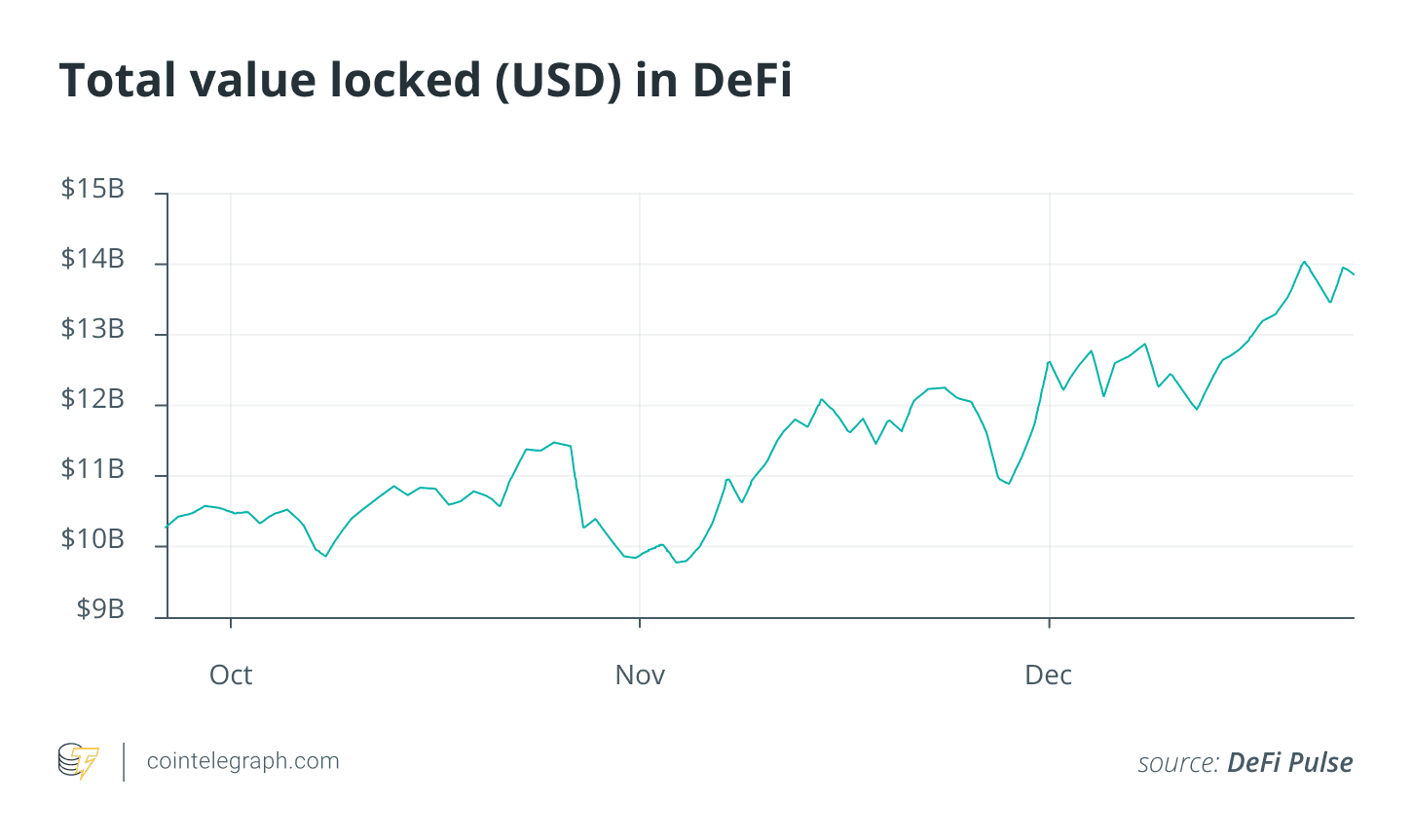 In 2020, the decentralized ethos of cryptocurrency truly established itself, and decentralized, peer-to-peer trading within smart contracts has evolved to the extent that a new ecosystem of unique passive income-generating projects can be easily accessed by any investor with a MetaMask wallet and a few dollars worth of BTC, Ether (ETH) or Tether (USDT).

In addition to earning high returns on DeFi tokens, investors were also able to engage in a new form of staking that entails offering one’s assets as collateral to small crypto and blockchain startups in return for newly minted tokens. Usually, the tokens would immediately gain considerable value and provide yield to the stakers, or farmers. This phenomenon of “yield farming” got started with the release of Compound’s COMP in June.

The yield farming trend symbolized the radical nature of the DeFi space. Some projects were clearly designed to fatten the wallets of their creators by taking advantage of the FOMO and naiveté that is characteristic of many new investors in emerging markets like crypto. For example, a common farming mechanism requires users to buy a number of existing tokens before obtaining yield. Due to the immense inflation pressure early on, yield farmers often dominate the token’s price action and are themselves the source of the yield they are chasing.

Yet, a number of top-notch DeFi projects emerged and gained prominence thanks to yield farming. To date, they continue to grow their communities and offer revolutionary new financial concepts that could change the face of crypto and traditional finance.

Uniswap: One DEX to rule them all

It can be argued that of all the projects that gained prominence in 2020, Uniswap was one of the foundational players in catalyzing the DeFi boom. The platform provided a new ecosystem where anyone could create and list a token on the Ethereum blockchain without needing to pay listing fees to exchanges or participating in an exchange incubation program.

While Uniswap was launched in 2018 and showed consistent growth throughout its life, in 2020, it reached heights that few could have predicted. From averaging less than $1 million in daily volume in the first half of the year, the protocol accrued billions in liquidity in the “summer of DeFi” and peaked at almost $1 billion in volume. Even though DeFi excitement subsided since, Uniswap volume figures consistently challenge some of the more established centralized exchanges. In a throwback to the ICO days of 2017, Uniswap revealed the UNI governance token on Sept. 16 and airdropped 400 UNI tokens to every wallet that had interacted with the protocol. This “DeFi stimulus check” — as it came to be called due to initially being valued at around $1,200 — triggered a new bout of excitement and hype around the project that briefly drove the price of UNI up to $8.39, equating to an airdropped value of more than $3,300.

As opportunities to earn yield on crypto assets multiplied in DeFi, aggregation services became ever more necessary for average users to optimize their profits.

Yearn.finance and its YFI governance token emerged as the gold standard in the space, as the team combined the best features of smart contracts and the traditional financial system to create a unique ecosystem of services that are essential to investors.

Early data shows that the YFI token was trading at a price of $790 on July 17, but as traders took note of the project, YFI caught fire and, at one point, saw its token price surpass $43,000. Yearn.finance is perhaps the biggest success story of the summer, as its brief yield farming distribution created a tight, decentralized and professional community of developers and users. The project eventually hammered out an entire DeFi conglomerate by merging with a host of other protocols from other niches.

The team continues to deliver new and innovative products at a breakneck pace while remaining a grassroots and decentralized community.

Aave is another huge DeFi success story from 2020. Formerly known as ETHLend, Aave was founded with the simple premise of creating a decentralized finance protocol that allows people to lend and borrow crypto.

Aave initially launched as part of the ICO craze of 2017 and survived the crypto winter despite numerous challenges. Since its launch, the project has gone through several protocol changes and a token swap to emerge as one of the top DeFi contenders.

According to DeFi Pulse, Aave is the fourth-ranking DeFi platform by value locked with a current value of $1.73 billion supplied by its users. 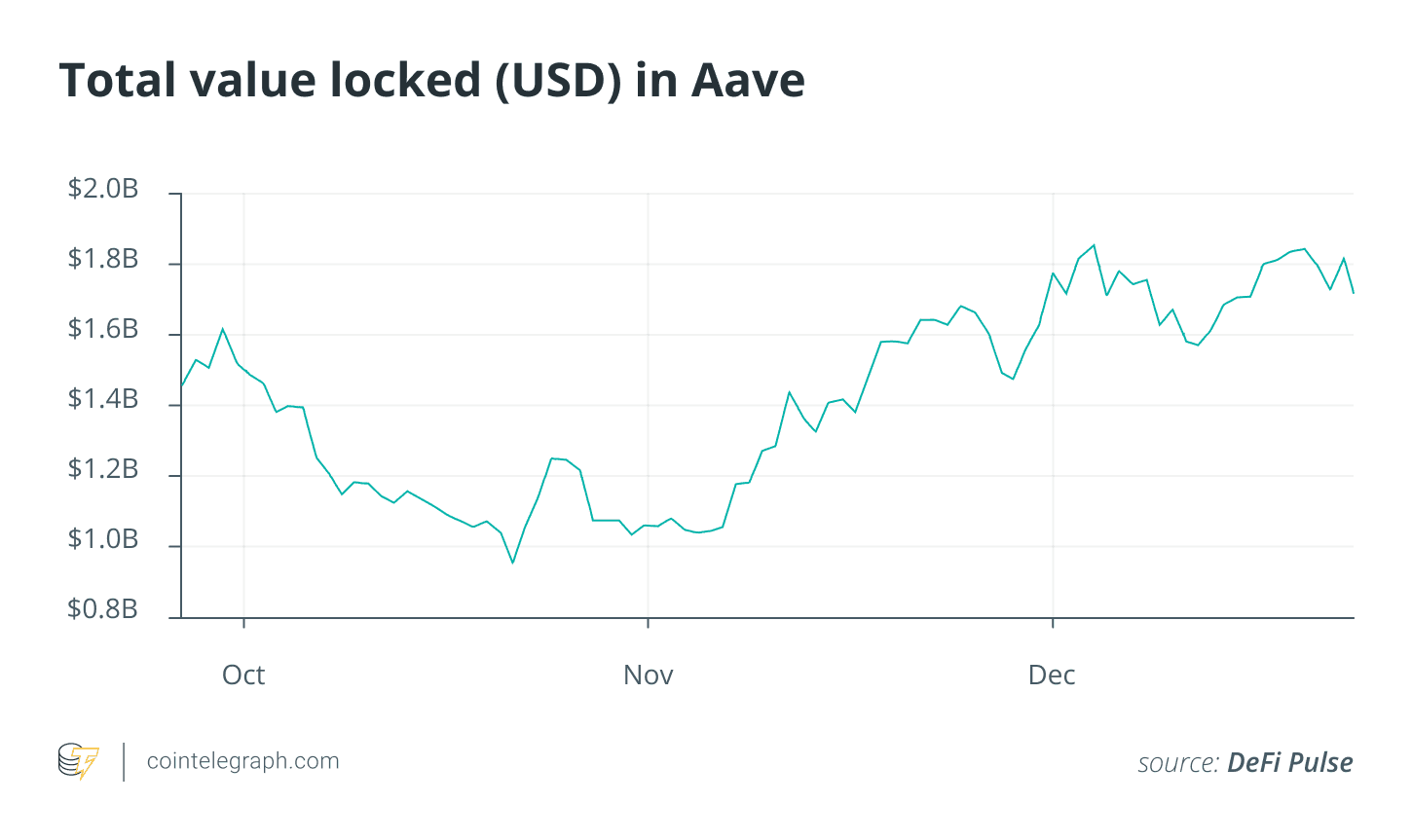 Throughout the year, Aave was the trailblazer for innovative features in the DeFi lending space. It was the first to deliver synthetic forms of collateral from exchange pool tokens; it released an under-collateralized borrowing mechanism; and it introduced many user experience improvements with its V2 platform and the AAVE token.

SushiSwap shows imitation is still the greatest form of flattery

Crypto wouldn’t be “crypto” without a good fork saga, and SushiSwap’s vampire attack on Uniswap is probably one of the most dramatic events of the year.

SushiSwap started by reusing Uniswap’s code and hatching a perfidious plan: It would only accept Uniswap pool tokens for yield farming, and at the end of the farming period, it would automatically redeem them and pocket the underlying liquidity for itself. The platform’s SUSHI governance token was designed to modify and control the associated decentralized autonomous organization, or DAO. Still, the yields involved in farming the token remained the strongest allure.

A combination of strong popularity and exchange listings propelled SUSHI to heights of $15 after starting from $0.15, attracting more than $1 billion in yield farming capital. The ploy was only partially successful at stealing Uniswap’s liquidity as its total value locked rose in lockstep with SushiSwap’s, showing that existing Uniswap liquidity providers were unwilling to make the jump.

In a dramatic twist of events, the project’s lead developer, Chef Nomi, abruptly sold nearly $14 million worth of SUSHI tokens and announced that he was stepping away from the project. SushiSwap users immediately interpreted this maneuver as a rug pull — or exit scam — and the protocol’s TVL plummeted as the price of its governance token dropped below $1.

Eventually, the uproar from the community convinced Chef Nomi to return the $14 million in Ether gained from the SUSHI sale, but the damage to the token value and the platform’s image was already done.

Despite this scandal, the community continued building out the platform, and the recent merger between Yearn.finance and SushiSwap helped restore confidence in the project despite its rocky history.

The platform currently has $1.13 billion of locked liquidity, and the SUSHI token recently reached a swing high above $3.00.

YFII shows that more is not always better

Similar to Uniswap, Yearn.finance’s YFI token was followed by a multitude of copy-cat clones seeking to ride on the coattails of the popular DeFi token.

DFI.money (YFII) initially launched as just a fork or copy-paste clone of Yearn.finance, and the protocol received backlash from many in the DeFi community, as the project appeared to lack purpose.

Some exchanges such as Balancer blacklisted the asset due to the fact that it was announced via Medium by a pseudonymous account, while the project appeared to lack any merit beyond being a clone of YFI. Some analysts compared the controversy to the Bitcoin–Bitcoin Cash split, though much less impactful.

An eventual listing on Binance did see YFII’s price spike to $8,54, and for a moment, traders viewed the token as a cheaper alternative to investing in YFI. Like many other DeFi tokens, YFII’s price withered once a strong profit-taking correction hit the DeFi sector, and the team’s lack of clear direction and fundamental development has kept the price pinned below $2,000.

Currently, YFII trades around $1,660 with a 24-hour volume of $86.5 million. The total value locked in the protocol currently sits at $3.8 million, and compared to $413.3 million locked in YFI, it has failed to achieve nearly the same success as its parent.

Curiously, DFI.money was just the first of many YFI-themed forks — the others were even less successful or legitimate.

The one food craze that combined the worst of DeFi

The summer of DeFi, as spectacular and consequential for the ecosystem as it was, was still a time of irrational exuberance and excesses, and nowhere is that more evident than in Yam Finance.

The project was among the first popular yield farming projects and set the stage for the era of projects named after foods, or “food tokens.”

Most food tokens were low-effort forks, often without even proposing any product to speak of beyond yield farming — examples include Tendies and Kimchi.

Yam started out with what seemed like noble intentions. It was a rebasing algorithmic stablecoin functioning like the more established Ampleforth. Its allure was the “fair launch” through yield farming, seeking to create a DAO community in a similar manner to Yearn.finance.

Yam was one of the pioneers of the “circular pool” concept, where some farmers had to first buy 50% of their capital’s worth in YAM tokens to receive more YAM tokens as yield. This, coupled with the fair launch promise, triggered a frenzy of interest and activity among broad swaths of the community.

The protocol collected hundreds of millions in capital, but there was one fundamental flaw: The smart contracts were never tested, much less audited by a professional team of security researchers. While the founders made it clear, it somehow did not deter the farmers — much to their chagrin.

The developers of the project made one fatal flaw — they forgot to divide by 10 to the power of 18. Ethereum smart contracts use very large integers to represent decimal values, requiring developers to multiply and divide by this factor when performing calculations.

The project’s first rebase thus created an enormous number of new coins that all went to its treasury. This made it impossible to reach a voting quorum and deadlocked the protocol — the bug became unfixable.

Yam relaunched afterward, but it never reached the same heights of popularity as during its initial phase. The experience serves as a stark reminder of how things can go wrong in DeFi.